How I Made My First Game

I have heard it mentioned before that there are writers whose primary goal in covering a subject matter is to learn enough about it before they inevitably try it themselves. Akin to distance learning, through talking to the right people and discussing the right subjects, eventually one can garner enough knowledge with which to tackle a task first-hand. While I am willing to believe that these types exist, I do not consider myself to be one of them.


I have been writing about games in various capacities for approximately three years. Not much time at all, in cosmic terms. When I started, my hope was to become to a professional games writer – in any sector of the industry. As time has progressed, even over such a short period as these three years, I have begun to find myself being lured ever deeper into the mechanics behind making games.

I put myself off the idea with a variety of effective excuses such as:


While many of those have remained the same, a few notable challenges have been overcome within the past few months.

I place those in order of their use up until now. The mouse is in a shoebox behind me. It is an electronic mouse, not an animal. It turns out I still opt for a trackpad even when I no longer have to rely upon it.

In speaking with a number of videogame developers, I became increasingly tempted to want to try my hand at this concept of making games, no matter how basic it was going to have to be. I found an article by Anna Anthropy concerning the wonders of Twine, and decided immediately it would be my first new tool of 2013. This is year I would make a game. 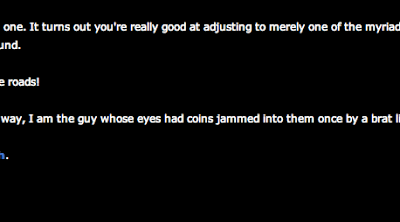 Strictly speaking, these are more akin to 'Choose Your Own Adventure' novels. Novellas, even. They're short and quick and easy to digest, and they are a heck of a lot of fun to make. In the short space of around a week or thereabouts, I created three of them. Here they are:


It's worth going ahead and taking a few moments to play through them. It will not take much longer than a half-hour for all three to be completed.

The most notable aspect is that, whilst all three are functionally the same experience, each entry iterates on the previous method. These are three experiences that took me approximately 4 hours to assemble, in total.

The joy of Twine, and what gives it serious value for anyone interested in game design, is the instant gratification that Team Meat's Tommy Refenes has described as being so crucial in learning's early stages in his Gamasutra piece 'How do I get started making games???'. I didn't even use that aforementioned mouse.

If you have been doing as much reading as you can take to prepare for designing your first game, I implore you to take a break this afternoon, download Twine, and break the ground. It's January 10, 2013. I have released three games this year. What about you?
Posted by Christopher at 12:34 PM